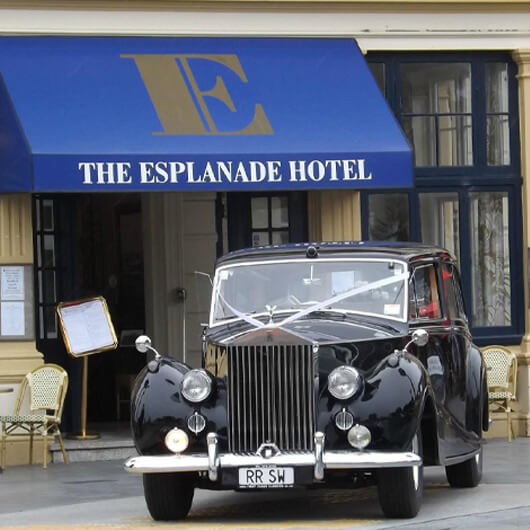 History of The Esplanade Hotel

Construction of the Â£7000 hotel started in 1901/02 by leading builder of the time, Archibald Grandison, and construction was completed in February 1903. The Esplanade Hotel quickly became established as a well run popular seaside resort hotel. An amusing incident occurred in 1919 when members of the Ponsonby Cruising Club posed outside the hotel for a photograph. The photo was sent to Sir Thomas Lipton, along with a request to donate a trophy to the club. Sir Thomas, impressed by the “Clubhouse”, sent out a solid silver cup then valued at Â£1800 for the competition, stating that he would like to visit the clubhouse if he came to New Zealand. The Ponsonby Cruising Club, which did not even have a clubhouse, were relieved when hearing of Sir Thomas’ s death as he never managed to visit New Zealand.

The Esplanade Hotel has continued to be an Auckland landmark, and has had several owners, all adding their own touch to create The Esplanade Hotel history. The hotel underwent a major refurbishment in 2002. In 2014, The Esplanade Hotel was purchased by new owners who have continued with renovations. The most significant refresh was to the downstairs bar area which has been completely redesigned into a friendly area including a High Tea room and ‘Club room’. It has grown to become ‘the bar’ and a very popular eaterie for locals and visitors to Devonport.

The charming seaside village of Devonport on the North Shore of Auckland, New Zealand is characterised by historic Victorian wooden villas dating back to the beginning of last century, and beautiful native Pohutakawa trees. This picturesque and quaint part of Auckland is centrally located, and just a ten-minute ferry ride from the heart of Auckland city. The Esplanade Hotel is the ultimate in seaside accommodation in Devonport, Auckland – a New Zealand Historic Places Trust building, and right on the waterfront of Auckland harbour.

The shopping strip along Victoria Road provides an eclectic mix of boutique shops, cafes, world-class art studios and galleries all within easy walking distance from The Esplanade Hotel. Adjacent to the hotel is the very helpful Devonport Visitor Information Centre. Devonport has a cinema, three museums, tennis courts, a gym, and the 18-hole Waitemata golf course is only 5 minutes by car. From the Devonport ferry terminal it is easy to make excursions to Auckland city and the islands in the gulf including Tiritiri Matangi, Waiheke, and Kawau.

Across the road from The Esplanade Hotel is the beautiful Windsor Reserve. This reserve is a lovely spot for a picnic under the Pohutakawa trees, to watch boats sailing on the harbour, to kick a ball, or to just relax in the sun. The well-equipped playground is a favourite with local families. Nearby Mount Victoria and North Head are easy to ascend and offer expansive views of the North Shore, Auckland City, Rangitoto Island and the rest of the Hauraki Gulf.

For beach lovers, Cheltenham Beach is nearby. The beach is sandy and a safe place to swim, and is considered by many to be one of Auckland’s best beaches. Stanley Bay and Torpedo Bay are also handy swimming beaches.

“The magnificent prospect of the harbour from every balcony, the salubrity of the air, and the convenience to the ferry, make the Esplanade an ideal destination – it combines the advantage of the city life and life at the seaside. Though only ten minutes from Queen Street it is absolutely removed from all the unpleasant concomitants of a crowded population.”

The Esplanade Hotel is an Auckland landmark. This Auckland boutique hotel accommodation majestically stands on the foreshore of Devonport just across the harbour from the Auckland central business district. It is one of Auckland’s oldest and most treasured hotels for accommodation and dining. Parking is on the free, time limited, public spaces outside.
Ambience
Friendly and personal service
Handy location
Accommodation
Esplanade Restaurant and Bar

“The best City views across the Waitemata Harbour from the bar “

“The Esplanade Hotel, across the Waitemata Harbour at Devonport, is probably
Auckland’s finest boutique hotel”

“The Esplanade Hotel, across the Waitemata Harbour at Devonport, is probably Auckland’s finest boutique hotel”